that's what it was like when I got up Monday morning.  Now the sun did get out later and it was a nice fall/autumn day, but that was a reminder that November is upon us.  We have had the heating on now for less than a week, so we have had a great fall so far.  Now to knuckle down to get ready for winter.  So I decided that a Beef and Pasta Stoup was on the cards for Monday's supper.  A "stoup" is part stew, part soup and all around comforting and warming on a cool day.  I made up my own recipe and if you want to have an idea of what to do here you are:

1/2 to 1 lb of ground beef, whatever you have on hand....
Large can diced or whole tomatoes.  Mine had no salt but Italian Spices in it.
Garlic, I used a heaped teaspoon of pureed garlic
1 large onion diced, I only had a small one, so used dried onion flakes as well
1 bell pepper (not on photo) diced
2 tablespoons (or two ice cube size) of tomato paste (not shown on photo)
Worcestershire Sauce, a big splash
2 Oxo cubes or Oxo granule packages
Seasonings to taste, I used black pepper only because the Oxo is salty
1 cup of uncooked pasta.  Now normally I would use Macaroni, but I picked up that package of pasta for 25 cents. 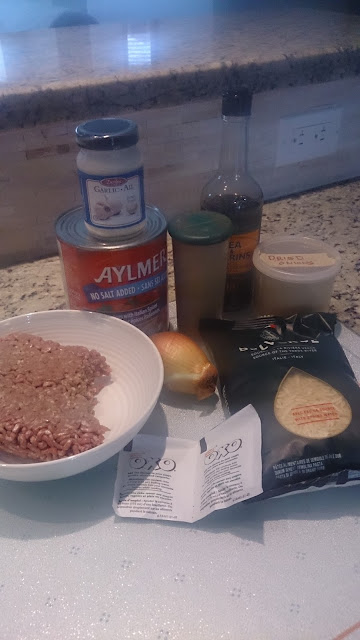 I have never seen this type of pasta before, it looks like giant rice, but it is pasta.  I used a cup which as per the instructions is 2 1/2 portions? 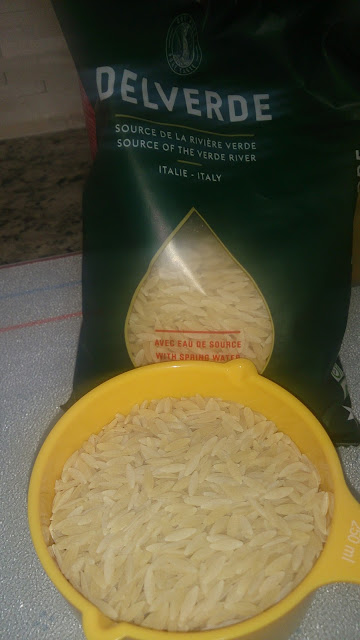 Brown ground beef in a pan until no pink showing; I also soften onion and red pepper at the same time as I am lazy, so this will take a good five minutes.  Drain away excess fat/liquid.  HANDY TIP HERE: I POUR A KETTLE OF BOILING WATER OVER MEAT/VEGGIE MIXTURE IN COLANDER AS IT GETS RID OF MORE FAT.

Put meat and veggies back in pan and add garlic, "W" sauce, Oxo, tomato paste and any other seasonings you choose and stir over high heat for a minute.  Add tomatoes and rinse out can and dump that can of water in pan and bring to boil.

When boiling add in pasta and simmer for 15 minutes. 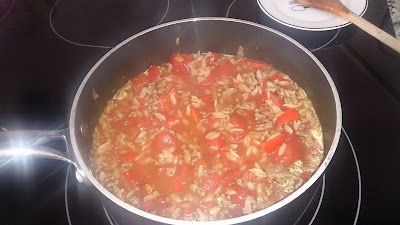 At this point taste and adjust seasoning to your taste.  Also add more water if you think it is too "thick."

There are no hard or fast rules to making this.  You could add in more veggies, less meat, add odds and ends of pasta or rice, or any other grains you have on hand.  Add different spices, the variations are endless.  The more extras you add in the further it will go.

I ended up adding some frozen veggies that I found languishing in the bottom of my freezer to bulk it up a bit and to make it more of a rounded meal. 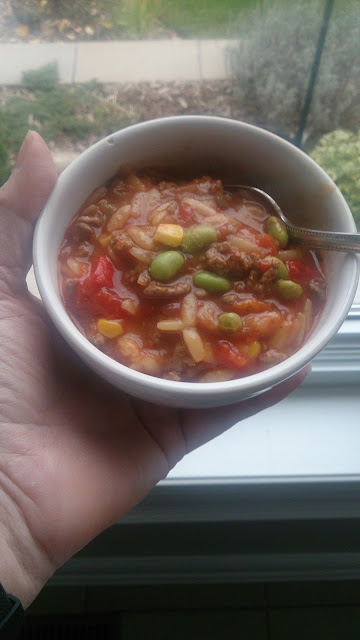 That sounds like a good meal for a cold day.

Looks yummy and perfect for a November day! I made chicken and vegetable soup with a cup full of soup mix (barley, split peas, quinoa, rice, lentils etc) - ate it for lunch and now again for supper :)

Love that pasta. I used that a lot when my children were little to thicken soups and make them more filling
You know when we were very poor lol
Now I use it becuase I love it lol

Looks lovely. I buy orzo pasta to use instead of rice in stuffed peppers and to add to soups.

Hello
Would it be possible please for me to contact you privately by e-mail?

I need some advice regarding a visit to Hamilton.
Hope this is acceptable.
Thank you in advance.
Christina Tomlinson.

I was served that pasta on an Air France flight 3 years ago, had no idea what it was until I got back home & checked it out. It was absolutely tasteless as there was no sauce to go with it. Serves me right for ordering a veggie meal. It came with 3 little strips of carrot, a small bowl of green lentils (no sauce or drerssing) a tub of hideous soya caramel and a bottle of water. My grandchildren got quite a decent meal plus a bottle of wine & a liqueuer each. They were 16 & 9 years old! So much for French cuisine.

Yours looks much better Gill.