We were given a gift card for a nights accommodation and a meal to one of the Vintages hotels in Niagara on the Lake by the kids for our wedding anniversary.

Dh took Friday off work as we had some jobs to be done that could only be done through regular working/opening hours.  So we were on our way to Niagara on the Lake before 10am and were there before 12 noon.

We were staying the night at The Prince of Wales hotel and having dinner at the Pillar and Post Inn. Our room was not in the main hotel but in the building next door.  We were on the ground floor next to the main door in and out of the building.  As hotel rooms go it was nice; but have been in hotel rooms just as nice.  The shower in the bathroom was my favourite thing and I had two long and luxurious showers while there.  We had a King Bed room and it wasn't that big, but adequate.  There was only one "comfy" chair and there wasn't room to move it so you could watch TV.  There were two bottles of water and three oranges in your room as a gift.  Plus Keurig coffee and tea making facilities.  I went back to the front desk and got tea and a jug of milk for our room.

When we got back in from dinner we discovered dh must have a girlfriend as there was this on his pillow!! 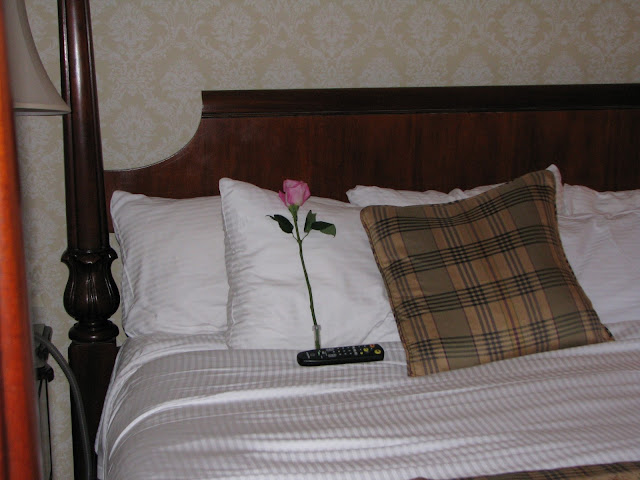 Personally I would have preferred chocolates, but that's just me!!

The dinner at The Pillar and Post was gorgeous.  The meal itself was perfect and here is the menu we got to choose from.  We had an amuse-bouche of watermelon and grapefruit drink.  If you like pulp in your juice then you would have loved this.  Dh does not so I got to drink his also!!!  Dh had the romaine salad to start, and I had the The Seafood Sampler Platter, of a crab cake, a white cheddar and lobster souffle and two lemon and garlic jumbo shrimp.

Dh then had bacon wrapped Beef Tenderloin with mushrooms, beets and baked potato.  I had White Crab Cannelloni: Hand Rolled Ricotta Cannelloni with White Crab and Sweet Corn Sherry Cream, Rocket Spinach and Crisp Fennel.  That was so good and dh really enjoyed his. This was the only good photo I took of our meal. 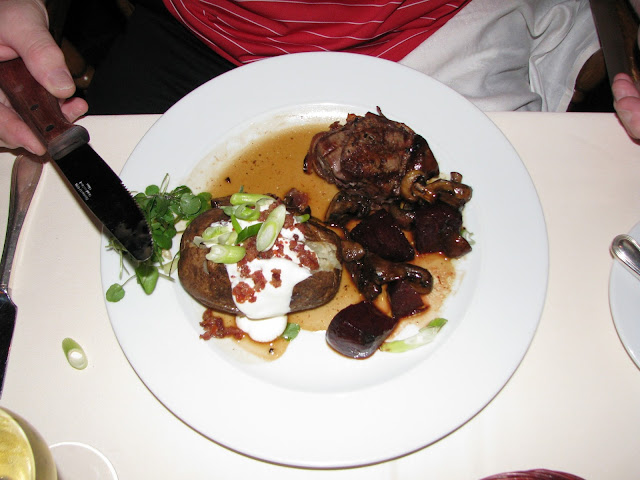 For dessert I had creme brulee with cherries and dh had amaretto cheesecake with warm strawberry sauce.  I also had an Irish Coffee and dh had wine.

We ended up having our dessert in the bar, as it was hot in the restaurant and a large investment company was having a family getaway weekend for it's employees and 150 of them including their children (lots of young babies) were having a buffet in the other end of the restaurant, so it was also noisy.

The meal though was just perfect.  However between me and you when we walked back to the hotel, someone had made the foot path windy while we were in there having our meal.  As I know it wasn't windy on the way there.  All I had was the Irish Coffee to drink, but again between me and you, I think they poured the whole whiskey bottle in my glass!!  It doesn't help that I rarely drink alcohol.

When we got back to our hotel we sat outside of the hotel having a cup of tea and a cup of coffee and here are some photos I took:

This was in the main foyer of the Pillar and Post hotel, lovely painting. 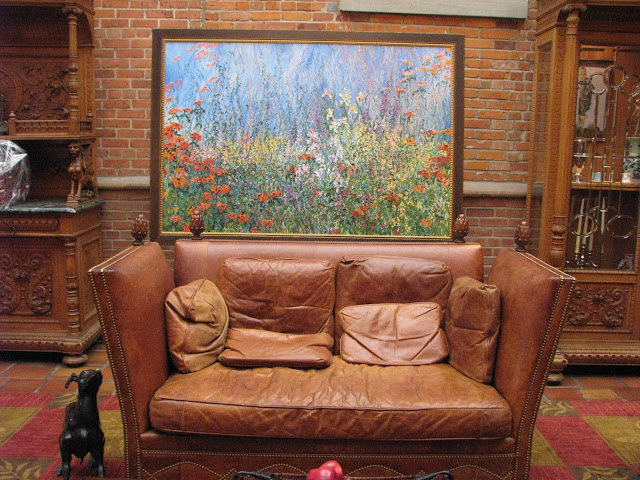 You could have a ride in a carriage around town, we saw a party of four give her $70 and they were only gone half an hour. 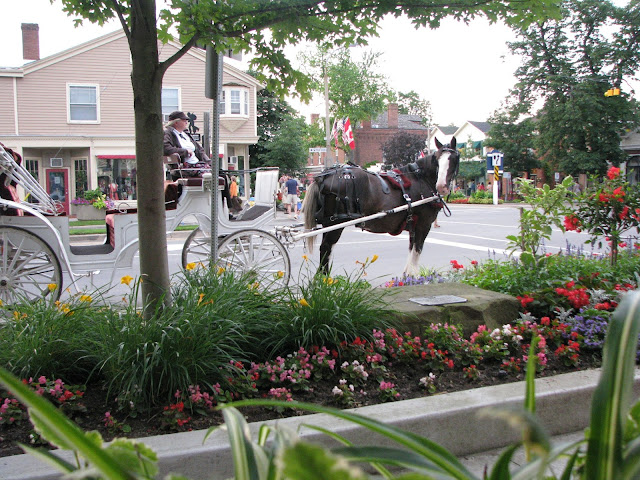 This was in front of The Prince of Wales hotel. 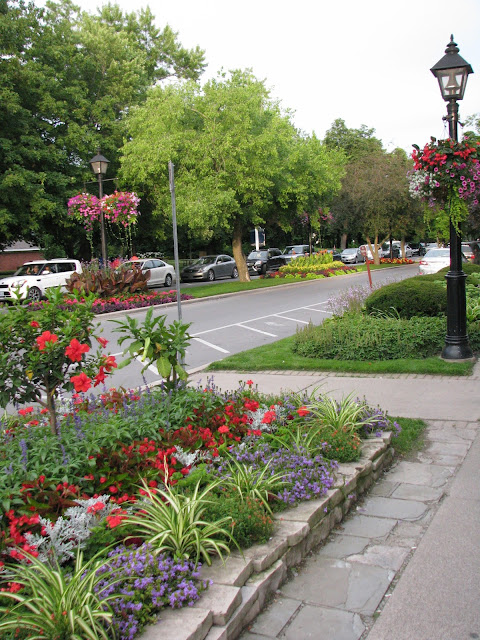 This was one the way to the building where we were staying, that fountain is to the side of the main hotel building. 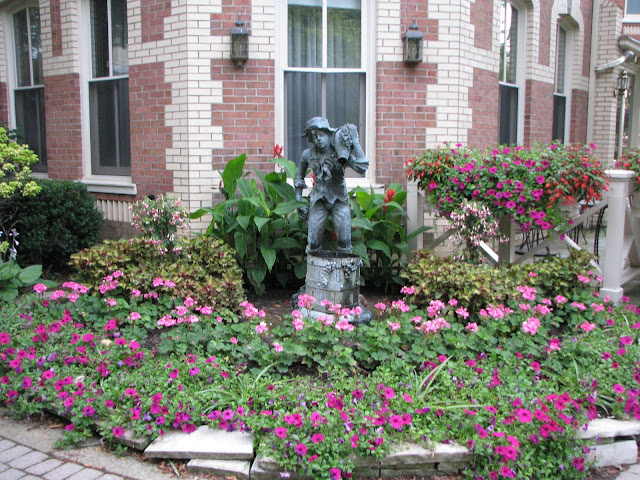 This was in the main foyer of the Prince of Wales hotel and was stunning, my photo does not do it justice at all. 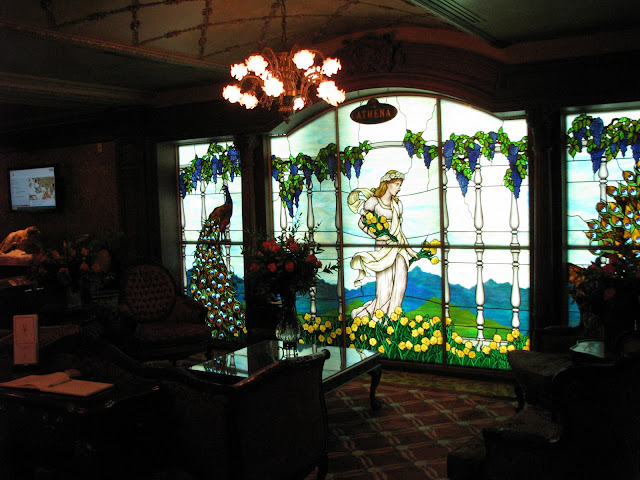 Although we had a lovely time, I honestly think the hotel is over rated and very pricey.  The service was impeccable and its those little extra touches that you pay for.  I have stayed in "regular" hotels where the rooms were as nice for a fraction of the price.  However, we are so grateful to the kids for giving us this experience as it's somewhere we would never have gone if we had, had to pay for it ourselves and they knew that.

We looked around Niagara on the Lake on Friday afternoon but it got hot and humid.  On Saturday we decided against paying $14 each for two fried eggs, a sausage, bacon and potato pancake at the hotel, plus $3.50 for a cup of tea and headed to Tim Hortons for breakfast............I know how could we eat anything after having that huge meal.  For me all I wanted was a decent cup of tea!!!  We headed home and were home before lunch time, as again Saturday was hot and humid and I do not like that type of weather.

Happy Anniversary, what great kids you have! That was a trip to be envied by all...hugs to you both for enduring and staying in love and enjoying each others company still...that is an accomplishment to be proud of
Sandi

sounds like a lovely time, and the food sounds lovely, but I would be like you--never pay that price on my own. But that was so nice of your children to do that for you.

What a lovely getaway! A splurge once in a while is so nice!