And the first clue was?

I had a few things planned on Friday so had to get organized and get going first thing.  So I printed and sorted out what coupons I needed then got in the car to drive where I was going. 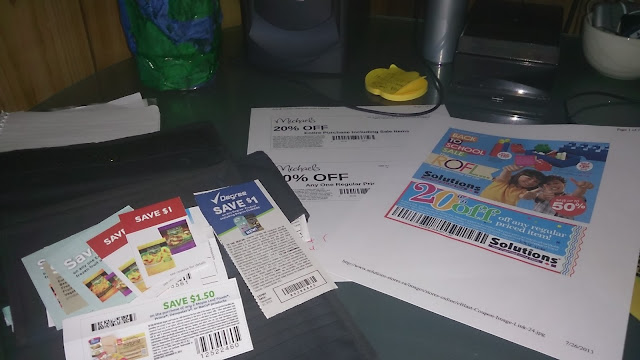 As I was driving along the car was making a funny sound as though one of the windows were open.  So I checked all windows and then pulled over in case it was the truck.........I know I have a sensor that indicates if the truck is open.  Set off again, there was a clatter up and it was as though a stone was flying around the wheel hub area.  All of a sudden there was a noise and the next thing I know the sensor for low pressure in my tire came on.  I pulled over and sure enough I had a flat tire.  I have NEVER EVER changed a tire in my life......

After calling road side assistance and being told that it doesn't cover changing a flat tire and being told that the charge was $50 I called our local towing company and asked them to come out.  I decided to at least take the spare tire out of the car in preparation for them coming.  I was actually proud of myself actually doing that. 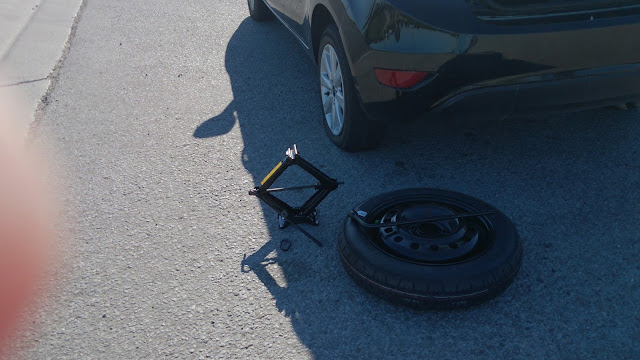 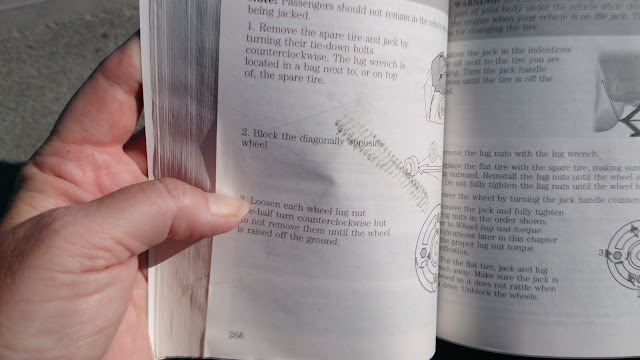 So I stood by the car reading the manual and a young girl pulled up and asked me if I needed help.  I asked her what was her first clue that I had no idea what I was doing and she pointed to the manual!!!  I told her I about the tow truck and she left.  Not long after a gentleman stopped and he told me to cancel the tow truck and save myself some money and he would change the tire.  So I cancelled the tow truck and he changed my tire and wouldn't take any money or even let me buy him a Tim Hortons coffee.  What a lovely man he was.

I then drove to the Ford garage in Alliston and they looked at it and had to order me a tire.  To cut a long story short the tire arrived Friday afternoon and I got the new tire installed.  I have insurance on my tires.........turns out I bought it when I bought the car?  It covers replacement tires, so it cost me nothing.

I honestly think after watching the guy put my spare tire on, I think I would be able to do it along with reading the instructions on the manual.

Now the bummer in all of this was I was only allowed to drive 80 kmph/50 mph when I had the spare tire on.  Do you know very few people drive that slow, including me.

I called into a new to me store in Alliston called A Novel Idea I am going to take some books there and get a store credit for baby books for our home library.

There are some good deals on at Sobey's this week.  Buy Lou's  Sliced Pork Loin (same as peameal bacon) you get a free package of breakfast sausage and a free package of hash browns.  The pork loin is $5.99.  The Europes Best fruit is on sale for $2.99, I had $1 off coupons so got five packages.  Also the Natrel Fine Filtered Milk is $3.97 is on sale for the 4 litre bag.
at July 27, 2013

People can be so kind, can't they? That happened to me, twice! Two days in a row with two different cars! Thank goodness people were kind enough to stop and help me!

Glad you got some help, and in the end paid nothing!

Changing a tire isn't hard in theory. It really has to do with how tight the lugnuts are. If they are really tight, it can be hard to have enough strength to loosen them.

That said....many moons ago, I had a flat and attempted to change it myself. I was on the side of the road practically standing on the T-bar trying to get the lugnuts loose....when a Dept of Transportation person pulled up to help. SHE changed my tire lickety split!

what a good samaritan! I have never had to change a tire but I think I could do it with a how to manual. the donut tires are smaller so that is why you have to drive so slow. My son now works for Sobeys so will have to see if we get a discount and start to check out the deals!

I once got a flat on Gasoline Alley HWY 11.The first I knew was when a guy pulled up level to me and started pointing at the tire. I called CAA to get the spare put on then drove at 80km along the 400 to Barrie..I was cringing at the looks I got from other drivers.Got two new tires at Costco and did some shopping while they were fitted. It's not fun is it? At least it wasn't in February!
Jane x

Great that you were going to attempt the tire change! Those lugnuts can be a killer though. Kudos for the people who stopped an thank goodness for insurance.
Take cae.

We had our first flat tire in over 20 years a few months ago and even though hubby was with me, it was still intimidating to change the tire (what if something goes wrong and we end up worse off than we were?). I hope you will practice changing your tire (with the help of someone knowledgeable) just so you will know that you can do it. Kudos to the nice people who stopped to help you!

This just proves that there are nice people all around us that we never meet. At least something positive came out of this...

I have never changed a flat tire, either!