Ds birthday and a book review

It's ds birthday today, he is the grand old age of 27 today.  We went out for lunch with him and dd and fiance on Sunday, to a place in Barrie called Big Chris BBQ Smokehouse Now I have to say we all walked out of that place stuffed to the gills.  We all had the half pulled pork sandwich with fries, baked beans and coleslaw.  There was no way we could have eaten the full pork sandwich as there was so much food.  I of course forgot to take my camera but there are some photos here of the food.

They also have something called the Ultimate Dirty Burger.
"Last Friday of the month we dare you to eat the ultimate DIRTY BURGER!!!!! .. Its 7,,, yes that's SEVEN lbs of prime rib burger so six 8oz prime rib patties,cause we only use the biggest and the best, 2lbs of of our finest pulled pork covered with a poutine in a 12 inch bun of goodness.. Oh YA each patty is covered in Medium Cheddar and at least three strips of bacon per pattie.( do the math )..As far as we know its is the biggest best and BADDEST burger in all of CANADA.. It is SIX of our normal dirty burgers and of course 3 of our double dirty's..NO ONE has a burger like this and so far, and as of today, It is UNDEFEATED.....( closest to finish,,, left 1.5lbs on the table ...thanks Randy)...See you next month ..Only for the brave..lol.. PS.. you have to finish it in a hour..good luck "

If you are ever travelling up or down Highway 400 it is only five minutes off the highway, if that.  I would like to try the chicken next time, as I did find the pork not as tender as I would have liked, but it was good.  As it was ds birthday they brought over a corn bread muffin with a candle stuck in it, so we could sing happy birthday to him.  Dd also brought us mini cheesecakes as a dessert.  She called ahead to see if that was alright, as there are no desserts on the menu.

Ds discovered it when he was doing an audit at a company close by and has been a few times with his friends.  It is very well priced and no one leaves the place hungry.  We went for opening for 12 noon and including us there was 17 people there during the first hour, so its pretty popular.

After we left there we popped into Tim Hortons for a coffee.   I actually had one of their new fruit smoothies, I just love them.  I am also in love with the strawberry banana doughnuts, and the sooner they take them off the menu the better, other wise I will be the size of a house soon!!!

"Lady in the Mist," by Laurie Alice Eakes 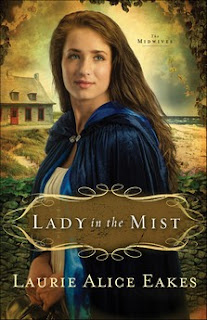 "By virtue of her profession as a midwife, Tabitha Eckles is the keeper of many secrets. Dominick Cherrett is a man with his own secret to keep: namely, why he, a British aristocrat, is on American soil working as an indentured servant.

In a time when relations between America and England rest on the edge of a knife, Tabitha and Dominick cross paths, leading them on a journey of intrigue, threats, public disgrace, and . . . love. But can Tabitha trust Dominick? Finding true love seems impossible in a world set against them.

With stirring writing that draws you directly into the story, Lady in the Mist takes you on the thrilling ride of love's discovery."

Well I have to say I enjoyed this book despite it not being an easy read.  I found it a bit slow to get into, but when I did I wanted to know what was going to happen next.  The love story  is such that you are not sure if they will or will not get together, right up until the end.  Also I liked the mystery side of the book, as for once I didn't guess "who did it," which is always a plus.  I also liked the fact there could be a sequel to this book....infact I hope there is a sequel as there is a lot more that can be told from this book.

I loved the history of the book and I loved that I learned new things in this book.

Stars out of 5: a resounding 4.  It was a bit of a slow start but once it got going it was good.  A good book to buy, or to borrow from the library.

Happy birthday ds. you sound like you had a great time at the restaurant. the food sounded yummy.

The burger sounds as though it would feed a family for a week!
Jane x

Happy Birthday to your ds. That burger sounds scrumptious. Hugs

Sounds like a good book....and as for the ultimate dirty burger...not all of us put together could eat one!