Its been a long day, we set off at 6am, and I didn't sleep in this year, so dh was happy!!! It was a pretty uneventful drive, thank goodness. We crossed at Fort Erie into Buffalo and there were no line ups, the customs guy scanned our passports and off we went. We always use our passports even though we are Canadian citizens, as we have that accent thing happening, so it saves confusion and extra questioning!!!

It poured down all the way through Pittsburgh, after that though it cheered up, and by Virginia it was down right hot and humid. One highway we went on was US-19 and we stopped at a lookout and I took a couple of photos. 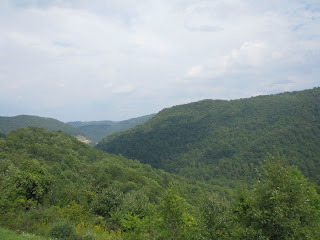 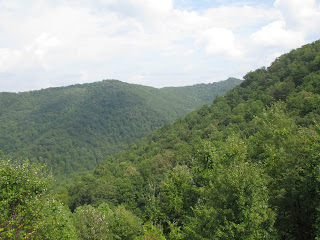 Now this plaque was at the same point, so it must have something to do with this person? 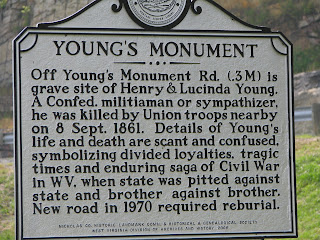 Now I have a question for those of you who are in the know...In West Virginia and Virginia we saw a number of crosses on the hillsides. There were generally three in a group. The middle and largest one was in a gold/yellow colour and the two either side of the larger one were silver/gray, what do they symbolize?

Tomorrow we only have a five to six hour drive so that is pretty easy. We try and do the majority of the driving the first day.

Now the funny thing about where we are staying tonight is that when we took the kids to Myrtle Beach a few years ago we stopped in the same hotel and went to eat at Shoney's, just like we are doing tonight, and it wasn't planned either time.

Oh by the way Daisy (GPS) was worth her weight in gold today, although we did turn her voice off, as she is pretty annoying after a while!!! Mind you if we get lost we want shooting, as not only do we have Daisy, we have a map printed out from Google, one from Map quest and a road atlas......talk about overkill....LOL

What a lovely drive you're having, too bad about the rain. I hope it clears up for you tomorrow. I didn't realize you were driving down and I see you are in the western part of Virginia right now. I shall be really interested in your next post. I do so love arm-chair traveling. I can see we're going to have to get a GPS system for our next road trip. happy traveling!

That's quite a trip! I don't have any idea what the crosses are about. Maybe you can do a google search. It wou;d be interesting to find out.

It is sad about the lost lives in the Civil war. Of my ancestors, two brothers fought on opposing sides.

I hope you are having a nice weekend.

Up and off early! Good for y'all! Safe travels. Keep us posted on the beach weather, Gill. ENJOY!!!

I did a little research on the three crosses, and found this website.

Around here...they put three crosses on hillside to represent Calvary....the one in the middle was Jesus and he is the light, and then the other 2 represent the 2 others who were crucified that day....wonder if that's what it means?

Hi,Beautiful pix.
The lg. cross reps. Christ dying on the cross, 2 smaller one the theives who died beside him.
Hope ya'll have a great trip!
Blessins',Lib