not too hot and no humidity. Poor dh though is sick, he's basically all stuffed up and full of cold, so we went to the pharmacy and got some medication, poor thing. When you read this on the 20th, he will be celebrating his birthday, so happy birthday dh, its the big 5.0......but you didn't hear it from me!!!

Anyhow for Friday September 19th, our plan of action for today was to go to Rainbow Row and visit three houses and a museum. We bought a package of tickets on the first day we were here, and basically for $65 each you get into 9 attractions, including 5 houses, 2 plantations and 2 museums. Its a pretty good deal, and the tickets are good for a year. You can buy the same attraction package for say $45 but the tickets are only good for two days. Believe me when I say you cannot see all these things in two days. We saw Middleton Place Plantation earlier in the week, we are going to see Drayton Hall one day next week, and the Charleston Museum and two other houses another day next week, so all in all 4 days entertainment for the $65 each well worth the value.

Today we toured the Edmonston-Alston House and the Nathaniel Russell House. We were supposed to also go to the Heyward-Washington House, but honestly we were dizzy with all the information that they threw at us in those two houses, we came out exhausted. I know you must think we are wimps, but honestly those guides never stopped talking the whole 30 to 45 minutes of each tour. It wasn't enjoyable, as there was just too much information to take in.

The houses were nice as were the furniture, and if you watch the Antiques Roadshow, you'll say, oh I have seen something similar on there.

We had lunch downtown and then went to the Gibbes Museum of Art. That was interesting, we both enjoyed the older works rather than the modern works. Infact me and dh have decided that we should be artists, as some of the modern works, leaves a lot to be desired!!! I did fall in love with the artist Alice Ravenel Huger Smith and bought a print of hers.

We then wandered back to the car park through some of the streets of Charleston and some of the courtyards, are just so pretty. All in all it was a super day.

Here are some of the photos I took:

This is the Edmonston-Alston House that we toured. 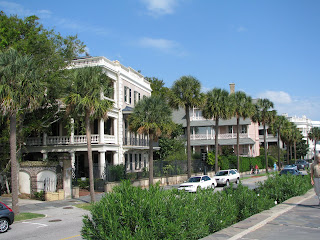 A house on one of the side streets, very tall and narrow. 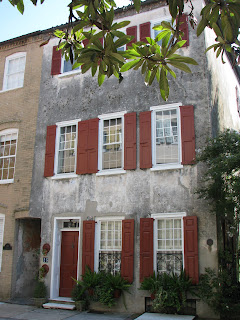 A courtyard on one of the houses on Rainbow Row. 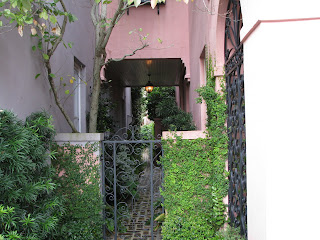 A side street with an American Flag flying. 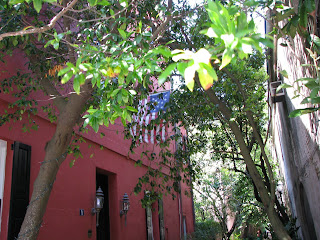 A magnolia tree at the Nathaniel Russell House, the guide said it was only 100 years old, I thought it looked older. 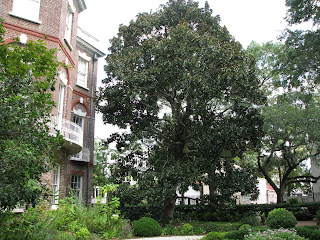 We were not allowed to take photos in the houses we toured.

Tomorrow (Saturday) we are going to Georgetown and on a boat tour of that area. We have been on it before, but it was so good last time, that we want to do it again.

thanks for sharing your vacation with us.

What lovely tours Gill. Sorry to hear your dh has a horrible cold. Hot toddy tonight? Hope he shakes it off quickly and that your weather continues to be as gorgeous tomorrow as it has been the last few days. Fun to read all about your trip.

Hi,
Hope your Dh feels better!
Don;t you just Love Charston? I do!
Sounds like your vacation is going pretty well.
HAve a great wk.end!
Blessins',Lib