First let me say how much I am enjoying reading all your comments, I am just having no time to reply to them, so please forgive me........

We had a super busy day, but it was really nice. The plan of action for today was to drive to Georgetown SC to go on a boat cruise up the river, click on this link for more info. Now we have been on this before and it is so well worth it. Captain Rod is a wealth of information as he has lived in the area all his life. He tells all sorts of stories and you are never bored. The only down side to today was that it was downright chilly sailing into the breeze up the rivers. However the sights we saw were well worth it. Now due to high tide and it being windy the wild life was non-existent today, but I remember on our last trip seeing gators!!!!

We got to see some of the old rice plantations and the cruise lasts three hours, actually a bit more than the three hours and is only $26 per adult. We then had lunch at the deli in town, and then had a look around the shops, which lo and behold had a fancy dancy shop full of Vera Bradley Bags, including some being discontinued so of course I had to pick one up...lol Its the Riviera Blue pattern, but not this bag.

Now Georgetown is a good hours drive from Charleston and probably about the same from Myrtle Beach, it really is worth the drive. Mind you it was a total contrast in many ways today. Let me explain. Some of the lots of land by the rivers can sell for up to 1 Million Dollars, then spend the same again on building the house, put a $300,000 dock in (yes we saw one that cost that) and you have some pricey real estate there. Driving from Charleston to Georgetown, you see the poorest of poor houses, literately shacks and yes people were living in them. We took a wrong turn to get out of Georgetown and went into a part of town where we stuck out like a sore thumb, mainly because we are the wrong colour and our licence plate on the car says we're from Ontario!!!!! Pretty interesting to say the least...............

Anyhow, got back from there and had a cup of tea and phoned a couple of people, bought a calling card, pretty neat thing, haven't bought one before. We then decided to go out to TGIF for supper as poor dh just isn't well, but he's insisting on carrying on. Popped into a couple of stores in the mall and then came back to the condo. No idea where the day has gone???

Anyhow, hear are some photos I took today:

This plantation was gifted to the South Carolina Wildlife Association, or something like that, I can't quite remember what he said 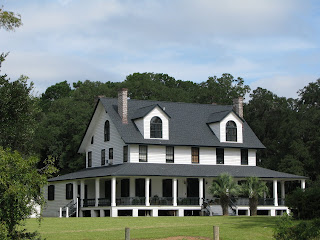 A doctor from Florence SC built this home for his retirement, 13,000 square feet!!! 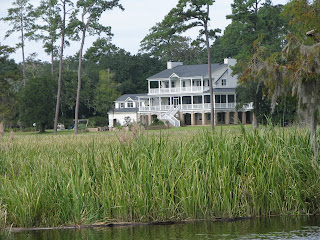 His dock taken up river. 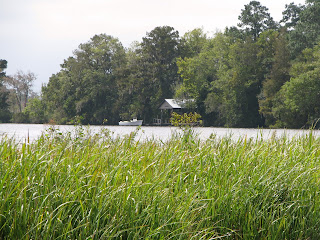 This is either a bald eagle or an osprey nest, I get the two mixed up. 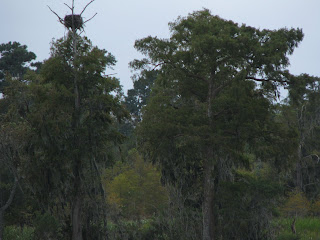