Hello from heat and humidity central!!!!

Well it rained overnight, and rather than it cooling things down all it did was make matters worse in my opinion. It was 93% humidity this morning, boy was the air heavy. Anyhow, not one to be sidelined by the weather off we go. Today's destination was Middleton Place Plantation. Now first let me say, for those of you who have been to the Biltmore Estate in Ashville North Carolina, Middleton Place will be a huge disappointment. If you haven't been to Biltmore before, you will probably love Middleton Place. For us it was a disappointment.

I am not sure what I was expecting but what we saw was nice but compared to Biltmore it was tiny. We took the carriage ride and while that was nice, it took you through the woods and around a couple of ponds. The girl was full of interesting facts which we wouldn't have known. For example, did you know that Spanish moss, is neither Spanish nor is a moss? It's actually related to the Pineapple family? I know I made her repeat it just to make sure I heard right. Here is a tree covered in Spanish moss 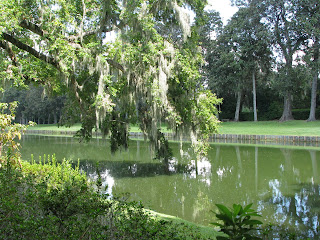 Now with going through the woods that included major bamboo plantings, hint here, don't plant certain types of bamboo as its invasive; 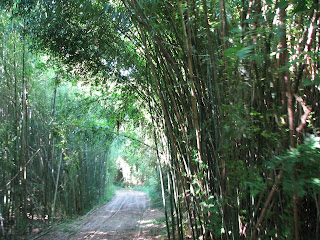 Anyhow, going through the woods, subjected us to delightful types of biting insects, which just adored me.....am I just a lucky one or what? Also only we could get two horses with a gas (farting) problem.........good luck for us or what!!!

We then took the house tour, and of course our tour was full to the brims, which is fine in a huge house but this house is tiny, so it wasn't as enjoyable as it could have been. However what they did have in the house was really interesting. 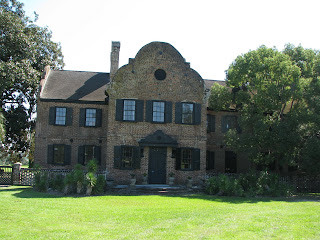 By the time that was done it was lunch time. Now they have very few eating options and their lunch menu was a fixed three course menu which actually was fine for us. It meant it was a couple of firsts for me, as I had She Crab Soup which was yummy and Hoppin John which was way too salty for us.

We then toured the stable yards and some of the gardens but the heat was unbearable for both of us. I was soaking wet with sweat again, even the people working there was saying how hot it was. Anyhow it was worth while going. On the way out I called in at an outdoor exhibit where they had some reptiles from the area and they had the cutest little alligator called Olive and a turtle called Wilson. I got to "pet" the alligator, don't worry it was all of two feet long, and the handler held it all the time, though she did let it have a little walk on the ground, as there was only me and another woman there at the time.

Being as old as I am.......I had to have a nap when we got back. Dh found a soccer game on tv so he was all happy. Also you will be pleased to know that I now look like a boiled lobster, though today I did make an effort and put sunscreen on my face which made my face shine like a beacon, which will know doubt be helpful in attracting aliens from outer space. I do resemble a stop sign now with lily white legs!!! Can I get any more attractive I ask you?

We have just had a major thunderstorm go through, so hopefully that should cool us down a degree or two? We're heading to a tea plantation tomorrow (Wednesday)

(I am having problems loading photos, its a blogger.com issue I think)

Oh dear, I do hope it cools down for you by tomorrow but you made me laugh about the gassius horse! Yes, you really lucked out didn't you :))

Enjoyed all the potato recipes too.

I hope you cooled off some eventually. It looks like a lovely place to visit.

A tea plantation, that I would love to see myself.

I have tried the Hopping John by Clarissa and Jennifer (Two Fat Ladies?).

It's the same here in Oklahoma during the summer. You get a thunderstorm and it doesn't clear the air it just gets even more steamy. You have my sympathy. Interesting post thought, Gill.

thanks for all the comments.....