Our trip to Georgia last year....

So last year we decided to spend one week in Georgia and one week in Tennessee for our vacation. So we book this cabin in Blue Ridge, Georgia for the week. I mean the cabin/house was stunning inside, click on this link to see photos of inside.

This is the front of the cabin: 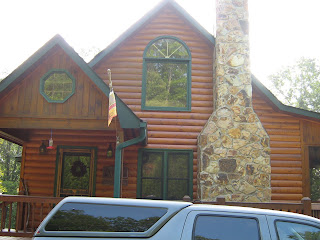 This is the back of the cabin: 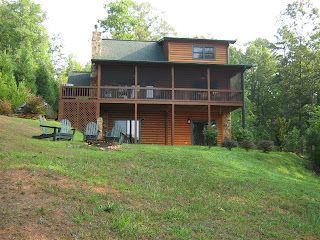 However as with everything we have some, it could only happen to us stories. First let me say the people in Georgia are lovely. The place is lovely, it was just not the right place for us..........however saying that I do think we may go back again one day.

So we get the directions to the cabin from the cabin rental people, plus dh prints out a map from Google. We didn't have Daisy (GPS) at that time, thank goodness. So we get to Blue Ridge and the cabin rental place is just out of town. For some reason we decide to follow the Google map, as that will be right won't it.......wrong, wrong, wrong. We turn off where the Google map tells us, and the asphalt road turns into a gravel track that goes into a forest? Okay well we know that the cabin is in the woods, just didn't realise how far in the woods.

Along this gravel track we go and all we see are the odd run down trailer/mobile home. Both dh and I look at one another and say this can't be right, and there is no way we are staying here. At this point we both look out of the mirrors and there is a guy all dressed in black with a black helmet and visor barreling up behind us on a black motorcycle. It scared the heck out of us. Dh pulls over the let the guy pass and he waves and goes on.

Finally we come to the end of the gravel path and we finally find the way to the cabin rental office. Tell them what happens and she say, yep that happens all the time, Google doesn't take you the right way, you should follow the directions they sent us.

Anyhow, she gives us a map for our cabin and we follow it. Its in a forest subdivison, but the way they have planned the houses/cabins, you can barely see one another. So we drive and for the first little while its asphalt, but then it turns into a single track gravel road, are you beginning to see a theme here!!! Finally two miles in from where we entered the subdivision we finally find our place and its stunning. If I could have picked that house up and placed it in a wooded area up here in Ontario I would live happily there forever, it was that nice.

Now after the Tennessee experience the year before I had made sure we were not hanging off the side of a mountain. Also I noticed with these cabins there were some with dead creatures hanging off the side of the walls. Some people may find that charming.......me personally its a big NO. When I am eating my breakfast I don't want dead animals staring at me!!

So we unpack our things and head back out to get something to eat. In the guide book it recommends this restaurant. So as its reasonably close to where we are staying and as we were tired we head there.

We are seated in the middle of the restaurant and the tables all around us are full. We order and we wait. As we are waiting I begin to hear other people's conversations, and they are not happy, with the service, the food etc, etc. So I say to dh, I don't have a good feeling about this, and sure enough when our food arrived it was all wrong, but as we were so hungry and tired we went with the flow.

So we get back to the cabin, have a shower and eventually go to bed. Now we live in the middle of a major city. We are used to noise and street lights. It was pitch black dark and quiet, I mean dead quiet. That was the worst nights sleep I have ever had, I was convinced we would be murdered in the middle of the night by an axe murderer. It didn't help that we didn't have an alarm system on the house. Even so, talk about us being townies I mean crazy or what. I will say by the end of the week we were sleeping fine, but that first night was awful.

So the next morning we get up and we decide to go into Blue Ridge. So we get back out of the subdivison and we pass this truck and they wave at us. So I say to dh, do you know them? He says, no. Next person we pass wave, but because we didn't wave back, they stuck their middle finger up at us, which is a rude gesture for those of you not in North America. So after that we waved at EVERYONE.

One of the things we didn't like about the area was the restaurants. We just were not finding anything to our taste for some reason. The first nights meal was awful. The second night we went to The Waffle House, which I must say is always iffy at the best of time. However the third night we decided to go to Pizza Hut, as we figured we should get a half decent meal there. Now to be fair I haven't eaten in a Pizza Hut for years, and after that experience, it'll be quite a few more years before we go again. So after that we gave up on eating out at night, and I cooked dinner everynight in the cabin.

As I mentioned to get to our cabin it was a single lane gravel track, with the odd passing place. So because of that I refused point blank to go out after dark, I just didn't think it was safe.

It was a hot and humid week when we went and we ended up being back in the cabin everyday by 3pm, as the heat was to much for us. We had satellite tv, so dh was able to watch his soccer games on Setanta Sports, and we got into the show Crossing Jordan.

If you want peace and quiet this is the place to go. I think its only a couple of hours north of Atlanta, Georgia. I can sit and read, but dh gets bored with just sitting. We don't fish and it was much too humid for us to go walking far. The area was stunning, it just wasn't for us.

After the week is up we head to Pigeon Forge for a few days. I don't book a cabin with the company from last year, I book with another company..........big, big mistake. The cabin was terrible. It was covered in cobwebs, the place was just so unloved and a dump. So believe me I let rip with those guys. I got some money back, but would never stay with those guys again.

We did enjoy our few days in Pigeon Forge, and of course went to Dollywood, and Cades Cove again, but the cabin we stayed at spoiled our trip. I don't even remember the company we stayed with now, but it was horrible.

Email ThisBlogThis!Share to TwitterShare to FacebookShare to Pinterest
Labels: and it can only happen to me, Georgia, vacation

We have been here 4 years and it is quiet at night, and yes we have to wave more often, though it helps that I grew up in a similar environment and probably knew it was coming.

Noooooooo it all sounds pretty exhausting to me, can't remember the last time we went on vacation though, lots of people would say I am on non-stop vacation here .....

Hi Gill,
Sorry to hear about the bad cabin!
Lol Funny what we adjust to in our day to day living.We live in the county ,when we go somewhere with night traffic we can't sleep as its too light and not quite.lol
Hope your next trip is better!
Trying to catch up on visits ina bit if free time. Have a great wk.
Blessins',Lib

Sounds great and like an interesting trip - amazing looking cabin!

We have 2 gorgeous, rustic cabin rentals in Blue Ridge also. You can view detailed descriptions of our cabins, and several photos of the cabins and the area. Our cabins are clean, affordable & fully equipped. They have game rooms, hot tubs, fire places, mountain views, gas grills, rocking chairs, high speed internet, picnic tables & more Our cabin rentals have very easy access and are not on cliffs. A 4x4 vehicle is not needed and there is only 1/2 mile of gravel roads total leading to the cabin, the rest is paved roads. Our North Georgia Cabin Rental Website is: http://www.CabinsPlusMore.com

GIll, well the cabin looks fab' but even though I am used to living rural, not that rural and I'd have been freaked too. Around us there are plenty who live miles out and it's just not for me, what with the snakes tarantula's and tornadoes!

Sorry it wasn't such a great week, but I hope you had a rest at least

thanks for all your comments.

thanks for your comment on my blog! I look forward to going through your blog, too.

Was "surprised" to see the "cabin" photo -- it could be in the area where we have a place in the mountains (7,500+ feet) in California! And they also call them "cabins" -- although they are plenty large enough! Looks like a lovely area! Maryjo

That is one nice cabin! I would love to visit Georgia someday!
Mary:)