I think I can see a glimmer of light at the end of the tunnel!!!

The house is far from clean but it does look a lot better, so I thought I would show you some more photos.

Below are three photos of the living room. As you can see it has a door that is split in half. Not sure if it was originally in a pub, or a post office, but its really nice. I am keeping the bottom half closed in the hopes that the room may stay clean!!! It's not arranged how I would really like, as the futon is in there, plus the desk and a few boxes, with things in that I don't have homes for yet.

The second door in the room, opens onto the downstairs bathroom, which we are going to take out and put a wall in there. I should mention every room in the house needs to be decorated, but it will have to wait as we have some major dirty work that needs done first. 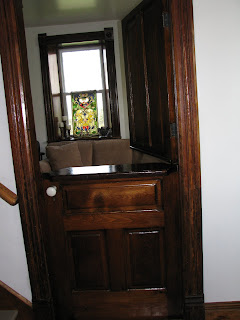 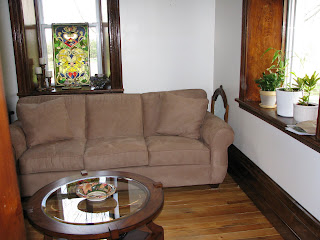 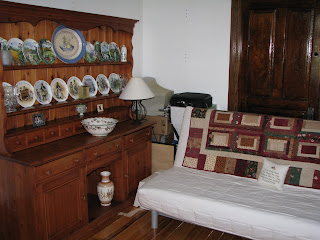 Below is a photo of the upstairs bathroom. I spent a while in their Friday morning trying to get it looking cleaner. I have cleaned the first layer of dirt off all the glass blocks now, but as with the rest of the house, it will take multiple cleanings to get them nice and clean. The shower is to pull out as the plumbing is not right, amongst other things, but not sure when that will happen though. 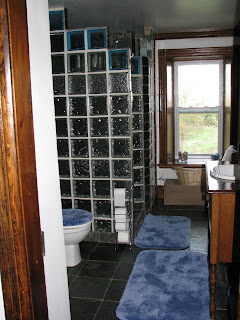 Here are a couple of photos of the upstairs landing. As with all the house a lot of woodwork everywhere. The door is sealed shut and basically goes to nowhere. Originally there would be a porch on the bottom of the house and a small deck area, where you could walk out onto from the upstairs landing. No idea why, but as we don't have a covered porch at the front of the house the door was sealed shut. Eventually we want to take it out, get a stone mason in to brick half of it and have a window installed in the upper half, again its a case of not sure when.

My dad made the bedding box you see on the landing, and as I don't have a linen closet, that's where I am keeping my sheets and towels, well some of them. 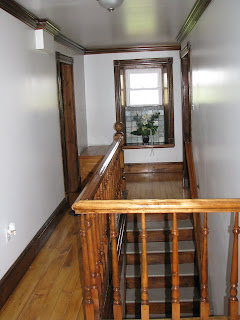 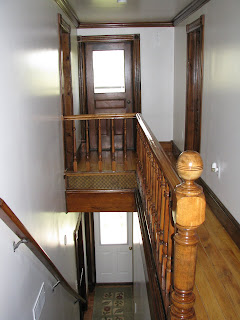 Finally, got a great deal on a new fridge/freezer this week. Close to where we live there is a Sears appliance/furniture/bed store, which turns out to be a franchise. Anyhow, we picked up a stove from there on clearance last Sunday and we saw a really nice side by side fridge freezer. Originally $1600, on clearance for $1300. Never thought much about it, but dh had. So on Tuesday we took our old stove there, as for $10 they would dispose of it, which was cheaper than anywhere else. We looked at this fridge again, and dh said to the owner, I'll give you $1000 for the fridge. The guy thought about it and said yes, well we were shocked, as I didn't realize you could negotiate at Sears?

So to cut a long story short I called him up on Thursday morning saying I wanted it, paid for it over the phone and it was delivered at 3:45pm that afternoon. I paid $1000, including taxes for it. It cost me $50 to have it delivered and just over $200 for the five year warranty, which pays for itself in no time, as they bring a filter with them when they come to service the fridge every year. It has the filtered water and ice maker feature which we love as well. 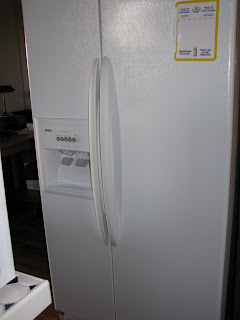 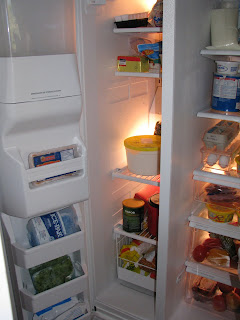 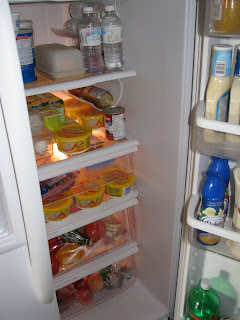 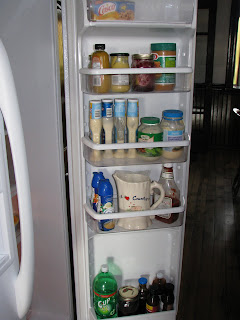 Your new home seems to boast some beautiful timber! And that fridge looks well-stocked enough for an army!

Oh, my gosh, your refrigerator is a twin to mine that I just brought in from the garage! The only difference is the shelves on the door of the fridge part--yours are clear on the bottom and mine are not. I LOVE this fridge!

I really like all the wood trim in your house--gives it such character!

There is something very comforting about a nice clean and full fridge and food cupboards isnt there.

The house looks amazing..I can see why you bought it. Lovely.

All he woodwork in the house looks wonderful, I can see why you fell in love with it, warts and all :)

It's all looking lovely Gill and beginning to sport a pleasing shine. Missed when you actually moved but do hope you will be very happy there. A x

Everything seems to be working out Gill, your photos are fantastic and your new home looks great.

Your home is beautiful, all that wood is just lovely. Thanks for sharing!

What a great deal on the freezer.

Nice to see things are coming together.

Wowzer, these are great photos. Your new house is beautiful. The ledge d/stairs in front of the window is wonderful - I love it. And the 6inch+ baseboards? Gee, didn't know they still had those; they are teriffic. I love everything about your new house that you have shared so far. The cleaning must be a drag, but oh when u r done it will sparkle!
All my best to you and your dh; may you have many many happy years in your new home.
Hugs,
/;-)
ps: you sure scored HUGE on your new frig/freezer!

all the dark wood everywhere reminds me of my daughters home. I love that old look!
thats a pretty snazzy fridge

thanks for all your wonderful comments........

like all the woodwork in your home...and it appears you are making lots of progress on getting it all cleaned and pretty. you really did good on the beautiful refrigerator...great price for it.
have a good sunday.