FROG.......AAAAAAARRRRRRGGGGGGGHHHHHHHH!!  Okay it may have been a toad, but regardless it was a slimy creature and was HUGE.....at least a foot across, as we have giant ones up here on the Acreage!!  And you all know how terrified I am of frogs. 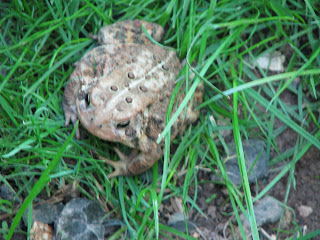 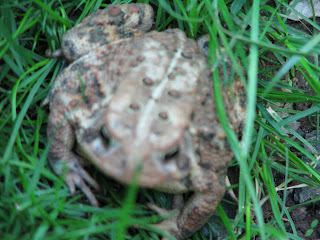 They are not very clear shots, but believe me they will have to do as I wasn't getting any closer!!  I think I did well to get as close as I did.
Something is eating the bark off the tree and I think it's the squirrels as they like to perch up there and "talk" to Molly!! 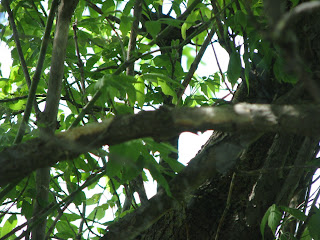 Dh has finally got a day off today.  He has been working seven days a week for a while and long, long days.  Infact he refused to work today, as England is playing the USA in World Cup Soccer at 2:15pm our time.  I may even join him in watching the game, I'll see.  All I am excited about is that all the games are on early enough in the day, so Coronation Street will be on, as its on the same station that has the World Cup Soccer on.   Finally someone saw sense about making sure Coronation Street should stay on.  Saying that the story line is pretty dull at the moment.  I'm liking the Eastenders one better.  Even I thought it was sad when Bradley left Stacey, she looked heartbroken.  We are at Valentine's Day 2008.  Coronation Street we are on or around August 24th, 2009.

http://www.youtube.com/watch?v=A-8BYmkLXTY
Posted by Gill - That British Woman at Saturday, June 12, 2010

Wow- I bet you got a shock when you saw that frog. I found one in the utility room last year and screamed the place down. I wasn't keen. I just wasn't expecting to see it there. Urrgh

gill great video.....I nicked it for my blog hope you dont mind
x

I love frogs. Whatever don't you like about them?

I like toads and frogs, too...love all the buts they catch.

The video is funny Gill!!
I'm right there with you about frogs!! This one looks like he has a bit of an attitude, so I would have stayed away from him too!!

Glad you stayed around long enough to take a picture of that frog Gill.

Haha, I used to love to catch frogs and toads when I was little! I'd probably still do it now if I had a chance to :o)

Thats one big toad. He looks like he is quite full of bugs. They actually do play a big role in the ego system just wish they looked prettier.

That's a huge toad! I have one guarding our front door... LOL

Manchester Lass, Now and Then said...

Hi Gill, Reading your encounter with a frog reminds me I must do a post on Cane Toads, especially for you:) I've just started to watch Corrie and Emmerdale over here on Free TV from 2002. Yikes I am so behind:(