This came in the mail the other day: 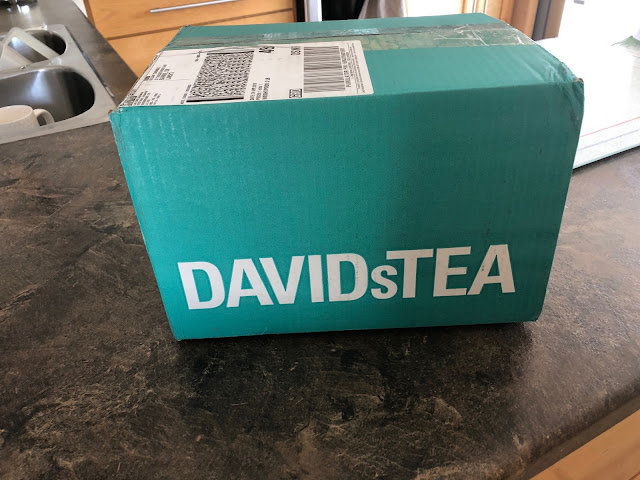 David's Tea had a free shipping event, so took advantage of it. 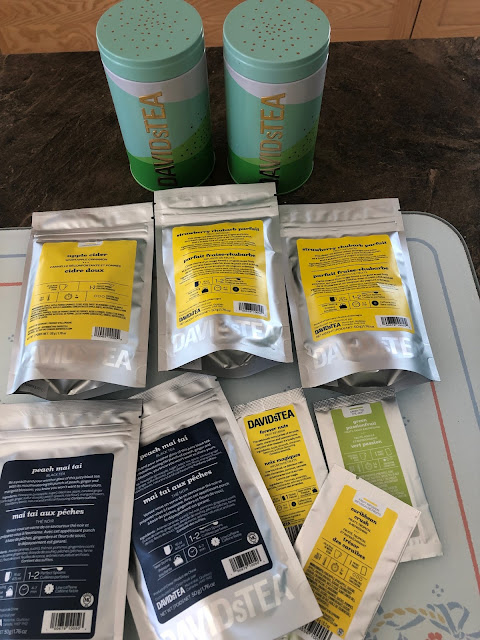 I picked up my tried and tested favourite Strawberry Rhubarb Parfait.  Peach Mai Tai, which I haven't had before. It is a very light tea with a lovely peach taste, would make a nice iced tea.  Also got Apple Cider; which turns out to be my new favourite thing.  It is so good, and doesn't have cinnamon in it, which I like.  It is also caffeine free which is a bonus.  Infact the ingredients are as follow:

Technically I seem to prefer fruit infusions rather than just plain tea.  They also send three sample teas with each order and as I ordered 100 grams of both the Strawberry and Peach teas I got to choose two tins to put them in for free, which is nice also.

I should be reading some of Laura Childs, Teashop Mysteries while sipping this tea!!

(THIS IS NOT A PAID REVIEW)

I see on a lot of podcasts that people rave about Davids Tea, i drink green tea but prefer Earl Grey, not a big fan of fruit tea but having said that i've not tried that many.

Oh those tea flavors look really good. I have been ordering mine from Upton Teas for years--or had been until their prices skyrocketed...I prefer flavored teas also..but not Earl
Grey--I like my lavender in my garden bed hahaha. I haven't read the Childs' tea mysteries either...my mornings are for coffee, my afternoons for teas...hugs, Julierose

I must check them out. I've gotten hooked on this Rose Tea Latte from Starbucks lately. But it is so expensive.

We've visited one of their stores.
Hubby is into an Egyptian licorice tea. I cannot even stand the smell!!!!!

I never hear about these special offers. You must be on their mailing list. They all sound yummy!

David's is not in my good books right now. No Irish Breakfast or Darjeeling! I think they have been discontinued.

Be careful with some of their fruity blends. My daughter in law loved one of their Ameretto blends. It sent her blood sugars through the roof. Her GP told her she was a borderline diabetic and to get a grip. Spoke to someone who used to work at David's and she told me that there was a lot of beet sugar in some of their blends.

I have seen one of their stores in a mall in Regina. Now I am tempted to pay it a visit the next time we are in the city.