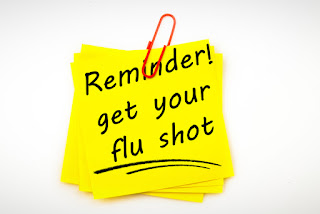 For the first time ever DH and I got our flu shots.  Last time I was at the doctor's he said that DH really should have a flu shot because as he put it;


"he is the poster boy of the people who really should have a flu shot."

His chest is so bad when he gets a cold, and unlike normal/regular people it takes him months to get rid of a cold.

As with most things in life it seems, he won't do these sort of things unless I do it.  The only thing I have refused point blank to do before him is get a colonoscopy..........no point in asking me why not!!!

We went to our local Wal-Mart where our pharmacy is and one of the pharmacists did it.  Very painless, quick and easy.  We even got a bandaid/plaster on our "wound," which I proudly showed Nora via Facetime.  She has a bandaid/plaster fetish!!  However she had a nicer bandaid on her knee (AGAIN!) which she had to show me.  No point in competing with a four year old as to who has the most and or better bandaids, it seems.

Do you get a flu shot?

Posted by Gill - That British Woman at Wednesday, November 29, 2017

I never got a flu shot. I asked my doctor once many years ago and he did not really care for it. However, I am just like your husband, so may be I should ask again.

I never had a flu shot, but when I turned 65 I decided maybe I should. I am prone to getting lung congestion after/during head congestion. I got the pneumonia shot too, which has dramatically cut down on sinus congestion which has in turn helped me not have such horrid ear problems, sore throats, and chest problems. Mine all starts with sinus infection and rushes down to incapacitate me. Get the flue shot. It is a two-part shot, one and another later, sort of like a booster shot.

I don't get them every year, but because I am going to have surgery sometime soon the DR insisted on it. I get my colonoscopy too. Easy Peasy Gill!

I have had the flu shot for many years, and plan on having this years jab tonight.

I haven't had it done in several years.

have been getting them for over 20 years! so far so good

I always get a flu jab. The only year I didn't was when swine flu was bad. I caught it a few days before I was due to have a jab. It took me MONTHS to get over it; so now I make sure I get it nice and early x

I have never gotten a flu shot, but I have been seriously considering getting one this year.

I don't get flu shots. Yet. My immune system is still relatively healthy, so until I feel compromised in that area, I am flu jab free.

Yes I always get a flu jab in September. They seem to work so will continue to get them. No point in taking unnecessary risks when you get older.