I am in the middle of knitting a baby blanket and using a different type of yarn and I need # 9 needles for this project.  I normally use 2.75 or 3mm needles for my hats and other projects, so it's like using dinosaur bones knitting with the bigger needles. 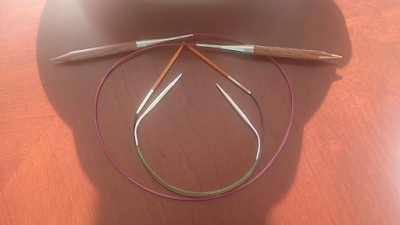 I have got this done so far: 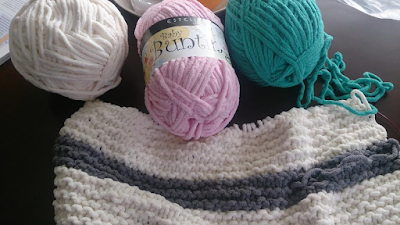 It's going to have to wait now until the beginning of February as that is when dd should find out whether she is having a boy or girl.  Because of the size of the needles I could not get a loose enough cast on.  Had to get Angie to cast on for me, and knit the first row to start me off, which is crazy.  I did attempt it twice and had to pull out so I was getting frustrated.

When I started knitting last year I said I wanted to learn how to knit a pair of socks.  I bought this book recently: 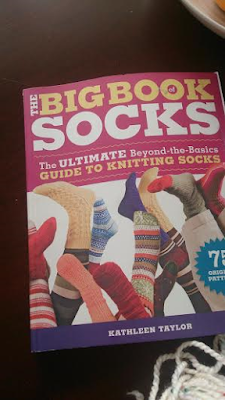 As I have never knit with multiple needles I decided to start with tube socks to get used to knitting with four needles. 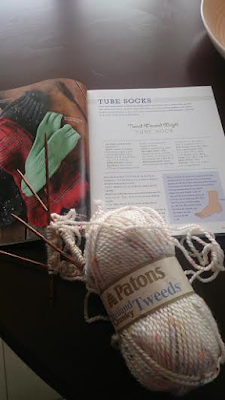 I will admit to finding the whole thing very awkward, but on Thursday at knitting I will give it the good British try!

I read a couple of good books recently.  Once Upon a Flock is about a woman who gets herself some chickens to fill a void and this tells of her adventures.  It was a good book and I reviewed it here.  We read  The Uncommon Reader by Alan Bennett as our January book club choice, my review is here.  My mam suggested I read "The Queen and I," by Sue Townsend, which I liked a lot better.  You can read my review here. 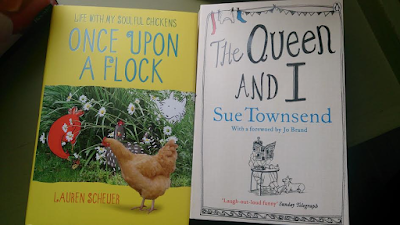 I know what you mean about knitting with bigger needles. Every time I go from sock needles to size eight or nine needles it feels like I'm trying to knit with rope and logs! An easy sock pattern is Stephanie Pearl McPhee a.k.a. the Yarn Harlot's basic sock pattern. I use it all the time. It's not fancy but it's easy and I can remember it without having to carry the pattern around with me.
Blessings, Betsy

Knitting socks is tricky but you soon get used to it.

Love the blanket, beautiful yarn looks so thick and soft perfect for a new baby. Good luck with the socks.

wow it is amazing anyone can knit with those! I read the Uncommon Reader, didn't care for it. couldn't picture the Queen in that role.

FOUR needles? I can't even handle two! I'm in awe of people like you and my daughter, who seem to do it so easily.

You title intrigued me, hehe, I have visions of you knitting with great big bones! Certainly a big choice of socks in your book xx

it is clumsy when going from small to big but the work goes so fast doesn't it, ,, great book suggestions,,

Good luck with the sock knitting - it is addictive once you get started! All your books sound interesting. And the chicken one must be all about me - I have 30+ chickens.

I too started with tube socks. Good choice.
I loved ONCE UPON A FLOCK!

Looking at those bundles of yarn, I find myself thinking of what a cat would love to do with all that.

Your knitting looks great! Your book choices look interesting. I must look for "Once Upon A Flock".
Take care Gill!

You have come a long way with your knitting ! There are so many lovely colours of yarn out there ! My mum was a wonderful knitter and I had lots made for me when I was a kid yeah dont get good stuff made like this from a store that's for sure. Thanks for sharing , Have a good day !

Your books sound fun! For all my knitting I just can't seem to get into sock knitting and I think I realized lately that it's because you can't see them once you have your shoes on! Ha!

Knitting socks...that's fun! Imagine all the pretty ones you can make.

I want to remember to go to your book review sight...but have only visited a few blogs so far today...been busy.

I wish I had the nerve to try knitting. I have even considered some of those knitting looms. Then I think I have so much fabric to use...and so many things I want to make that I step back from it. But I sure admire that you chose to try to learn and took to it like a duck to water, I think.

I'm into a book series now. It is easy when hubby can go to the library for me!!!

I always struggle when knitting with multiple needles or in the round. It just feels awkward to me and gets me all huffy.

I did manage to knit in the round once and I am going to try again once I get the courage up to do so.

LOL about the dinosaur bones - the larger needles do feel a bit like broomsticks, don't they?? I'm determined to learn socks this year as well. Good luck to us!!

Hi Gill,
I will have to read the chicken book it sounds quite funny.
A little off topic but still knitting. Could you tell me if you knit European Style? I do and am having a horrible time finding a good tutorial. I learned years ago that style and just picked it up again. I do not remember how to add stitches or decrease. I am looking for a good teaching book. But here in the US that method is not taught. Do you have any suggestions if you knit that style. Thanks so much. I enjoy your blog.

Barbara, I do not knit European style, sorry.

I love Sue Townshend!! I know just what you mean about knitting with dinosaur bones - it is a horrid feeling to start knitting with large needles when you are so used to smaller ones!