"Minding Frankie," by Maeve Binchy and other things 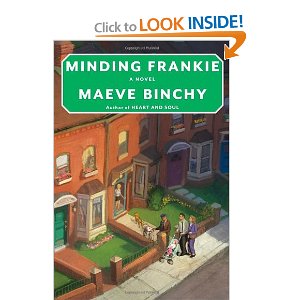 Maeve Binchy is back with a tale of joy, heartbreak and hope, about a motherless girl collectively raised by a close-knit Dublin community.

When Noel learns that his terminally ill former flame is pregnant with his child, he agrees to take guardianship of the baby girl once she’s born. But as a single father battling demons of his own, Noel can’t do it alone.

Fortunately, he has a competent, caring network of friends, family and neighbors: Lisa, his unlucky-in-love classmate, who moves in with him to help him care for little Frankie around the clock; his American cousin, Emily, always there with a pep talk; the newly retired Dr. Hat, with more time on his hands than he knows what to do with; Dr. Declan and Fiona and their baby son, Frankie’s first friend; and many eager babysitters, including old friends Signora and Aidan and Frankie’s doting grandparents, Josie and Charles.

But not everyone is pleased with the unconventional arrangement, especially a nosy social worker, Moira, who is convinced that Frankie would be better off in a foster home. Now it’s up to Noel to persuade her that everyone in town has something special to offer when it comes to minding Frankie.
Another super book by Maeve Binchy. I personally think she is one of the best writers out there. Her books suck me right in from the very beginning. I read this in a day, as I couldn't put it down . You get so involved in each of the character's lives you have to read more.
If I were starting out with Maeve Binchy's book's, I would start from the beginning and read them in chronological order one after the other.  As characters and locations from prior books keep popping up.  In this one for example the twins, Maud and Simon were involved in the story and I just can't remember their story prior to this book.
I borrowed this book from the library, which totally confused the librarian on duty, as I normally go in bearing gifts (books I have read), but this time I was borrowing a book from them, which doesn't happen too often!!!
Stars out of 5 : 5 actually it's more of a 10+ well worth the read!!

I finally updated my grocery spending totals  for the month of April.  Not too bad I am guessing but only have around $64 left for the month.  I have plenty in the fridge and freezer to make meals, I just need to make a menu plan; but we all know how useless I am at that!!!  How are you doing with your grocery spending this month?

I got a call from the garage in Barrie and they have refunded the half an hour's labour I asked for, so that will be nearly $57 back on my credit card.  I could have probably whined on for more, but this I thought was fair, and so did they.
Show More
Show Less
Posted by Gill - That British Woman at Wednesday, April 25, 2012

I'm glad you got a bit back from the garage and that they agreed it was fair.

I think grocery sales have not been that great this month, but I have stuck pretty well to my budget. I'm looking forward to checking out this week's flyers. I too have food in my fridge and need to get cracking on this week's menu. I stick pretty close to my weekly menus as I find it really saves me money...as long as my husband doesn't help me do the shopping. :))

A lot of our grocery money has been going on salad and fruit....seem the most expensive items. I must be the only woman in the world who never got into Maeve Binchy!
Jane x

Good for you for the refund! As for groceries, I have been doing really well on spending since my trip to Costco with my mom! Usually somewhere around 50$ a week. Yes, for me that is good. No car, so I can't buy in huge ammounts when there are specials, I have to think of what I can manage to carry home on my own. It may cost me more now, but my back will thank me for it when I'm older :o)

I definitely need to get back in to reading her books...I always like them.

Not admitting to anything as far as grocery spending!

I've read that one and really enjoyed it.

Always a major victory getting money back from a garage, so these people seem very fair. Nice book, a lovely read and it would probably make a sweet movie.

I have that book on my shelf and can't wait to read it! Grocery shopping? Hate it! Meal Planning -- hopeless at it. However, grocery shopping seems to be getting more and more expensive every week!

I always enjoy Maeve Binchy's books too. I haven't read this one yet because I haven't got that far. Like you suggested and I discovered for myself, you do need to read them in order, if possible.
Nice review, which made me keen to get on with it.
ps yes, if we don't support our libraries, they will disappear!!!

I am a Binchy fan but to be honest, this wasn't one of my favs, it was good but took so long to get into the story. I agree you need to read her in order but the problem is she is so long in between putting out a new book that i forget all the characters

I've read this book & enjoyed it - like I do most Maeve Binchy books.

The twins 1st popped up in the book about the resturant - can't think of the title...k just checked online - It was the Scarlet Feather :)