Hello from a very tired Gill and her dh....

We left this morning (Friday) at 8am and arrived at Morgantown, West Virginia at 6pm, having travelled over 900 km's. We have just over 600 km's to drive on Saturday, so should be home in 8 hours. 6 hours driving, 1 hour for stops and 1 hour for crossing the border.

I hope its only an hour for crossing the border and they don't search us, as we have a ton of stuff. We haven't spent over $700, so we are way under, so that's good.

As I mentioned yesterday, we went out for a fancy dancy meal. Well from 10:30pm to midnight, poor dh was sitting on the loo....I mean what else can go wrong with the poor man....oh his big toe is all swollen up now.......should I just shoot him and we'll start afresh?

It poured down until we hit West Virginia today. Must say West Virginia seems a nice state. One minor problem, they don't understand our accent??? So have to make a point of talking slowly!!!

We are staying at a Best Western hotel, as I cashed in my air miles for a $150 gift card. So anyhow, its either feast or famine when it comes to Best Western Hotels, and as far as West Virginia goes its famine!! So that is why we travelled to Morgantown, as it was the closest to the highway. Anyhow, we were pooped, so would have paid whatever just for a room. So I go to the reception and ask for a room for the night. She asks me what sort of room, I say a no smoking room, she says what sort of bed, I say whatever will fit me and dh!! She says there is a convention in town and she will have to charge me $130 for the night. I sigh and say something and she has no clue what I say??? So I repeat myself slowly and she says you look really tired....I say yes, we've travelled from Charleston SC........she types a few things and then says, I'll just charge you $100 + tax for the room???? Wasn't that a nice surprise?

By the way does anyone know the name of these birdies? They were always pooping on the balcony's and bathing themselves in the swimming pool!!!! Cute, but annoying! 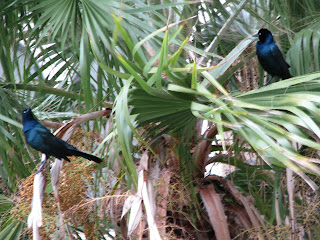 Anyhow, just looking forward to a good nights sleep and heading on our way home!!
Posted by Gill - That British Woman at Saturday, September 27, 2008

Wonderful vacation, but I know you'll be glad to get yourself, poor dh, and all your purchases home!

Sorry to hear about your poor dh being so ill. What a shame, nothing worse traveling while you're feeling under the weather. All you want is your own bed right? Your bird photo was very interesting. About as close as I could find was this picture found at: http://www.flickr.com/photos/raineys/2883231311/

Safe journey and I know you'll be glad to get home even after such a wonderful holiday.

Hope you had a WONDERFUL time!!!

Thanks for the comments, Denise you may be right about the bird.

As a British Woman living in Chicago I just had to visit your blog :)
I think the birds in your picture are probably Boat-tailed Grackles, did you happen to notice if they had yellow eyes?