Unblocking toilets and other things.......

Over on Expat Mum's blog she is talking about unblocking toilets and children.  As I was saying there I am an expert on this subject.  I just hope my dear darling children are going to read this.  Oh and a warning if you're eating DON'T READ THIS!!!

So two houses ago, we moved into a brand new house.  We had an ensuite bathroom, so the kids were the only one using the main bathroom.  The builders had installed the low flush toilets, which we thought would be great as we paid for our water usage in the city.

Almost from day one, the kids' bathroom toilet was blocking up and overflowing.  Where did it overflow you ask, under the floor into my above stove kitchen cupboard, and if I was really lucky.....into the above stove microwave........whoever is saying icky, icky, icky, I so agree.

So why did our toilet not overflow, because unlike our dear darling children we do not use half a roll of toilet paper everytime we went to the bathroom.  I mean I bought caseloads of the stuff, as we were forever going through toilet paper.  They would go through a toilet roll in their bathroom every day.

Then on one overflowing session, dh took off the toilet and it was full of Q-Tips.......yep they were shoving Q-Tips down the toilet........duh.......that also blocks the toilet!!!  We eventually had to change that toilet to a regular flushing toilet and things were fine after that.  Still went through as much toilet paper, but the water flushing through the toilet was enough to get rid of big wads of toilet paper.  Oh the joys of having teenagers in the house!!

Here is a photo of Molly, she is laying on the mat in front of the fire: 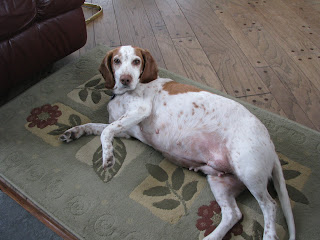 She brought me a present the other evening a dead bloody mouse!!!  She looked so sad when I was jumping around in a panic, and she looked as mad as hell, when I threw it out.  So much so I sat down with her and told her that although I am very proud of her, her mummy isn't too keen on dead bloody mice in the house.  She still didn't look too happy, but a day later she seems to have forgiven me.

Now when Molly is outside she is always on a leash, as with her being a Beagle she has a habit of following her nose regardless.  So it came as a surprise the other night, when I called for her to come in, she trotted up to the patio door, minus her collar and her leash........

It was even a bigger surprise on Monday morning, as I was doing some ironing and looked up to see her wandering around the fence........her leash doesn't reach that far....on further investigation, it turns out her leash had snapped in two.  So dh is making her another leash this time out of aircraft cable which is stainless steel and shouldn't break.

I was talking to someone on Monday and her friend is fostering a 3 year old Dachshund............I have always loved "sausage dogs"  Its a little girl and to my mind would make a perfect friend for Molly, but dh doesn't think its a good idea...drat!!

Did you remember to put your money in your pot for the Daily Savings Club today?


Make sure all your electrical devices are on a surge protector. This is especially true of your entertainment center and your computer equipment. A power surge can damage these electronics very easily, so spend the money for a basic surge protector and keep your equipment plugged into such a device.

goodness - I have three cats so I really do not want the dogs to start giving me gifts of dead mice too !

they drive me crazy..but I use a de-clogger called DAC it works really well...

When I was little I decided to see what would happen if I unraveled an entire roll of toilet paper into the toilet and then flushed. Let me just say this: I never tried that again, my mother just about killed me!!! lol

Oh, pretty yuckey that story, Gill, glad you warned us about not eating! Dang q tips! My husband wants to get a toilet that is shown on TV to flush a dozen golf balls at once. Luckily we have not ever found one at the home supply stores. HA May 2010 be the best year ever for you and yours. I suppose you buy toilet tissue by the case. :-)
Frances

Plumbing problems this time of the year is not a good way to start the year...But glad they're being solved!! Also glad that Molly is feeling well enough to go unleashed on a little adventure and bring you back a present!! I've never had a dog bring me anything...At least not yet! :-)
Hope your week is off to a good start!!

top advice on surge protectors our gill - they should be compulsory on computers as even a small surge on a computer will fry the chip and kill your computer very quickly and remind your readers that when your computer fries it kills your hard drive and all the info,pictures - the lot
my advice is if it is important dont keep it on your computer put it on a disk and keep it safe you never know and some pictures etc you will never be able to replace
...nick...

Miss Molly is just too adorable! She seems quite content and satisfied with herself ~ rightly so! Heehee!